SaveGREEN - The Power of Nature: An Introduction to Green Infrastructure

Home News SaveGREEN - The Power of Nature: An Introduction to Green Infrastructure
This is the first in a series of articles focusing on green infrastructure (GI) and how its various applications can help tackle the biodiversity crisis in Central and Eastern Europe. We also explain how the SaveGREEN project promotes good GI practices and better ways to design mitigation measures so that they can work adequately and in conjunction with ecological corridors. A helpful starting point, however, is to begin with an explanation of the difference between ‘green’ infrastructure and ‘grey’ infrastructure. So let’s get started!

Biodiversity in Central and Eastern Europe is under threat. Green spaces, and the species inhabiting them, are vanishing rapidly due to human activities. In the last 40 years alone, global wildlife populations have declined by 60%.[1] To make things even worse, the mounting climate disaster is accelerating the most severe drivers of biodiversity loss and natural habitat fragmentation.

A ubiquitous array of fabricated grey infrastructure stands as monumental evidence of the ecological crisis. It often comes in the form of towering blocks of concrete that loom over once-forested areas – formerly home to diverse ecosystems and teeming with wildlife, but no longer. Then there are the power-station complexes, those great engines of modern civilisation, churning out massive amounts of CO2 and other noxious greenhouse gases into the air we breathe. Finally, there’s the vast network of roads and railways that crisscross Europe, slicing up formerly large natural habitats into smaller patches of land and hindering species movement.

In short, grey infrastructure is any number of man-made constructions that end up dominating and subduing nature, instead of working alongside it. Far too often, EU Member States default to grey-infrastructure development in an obstinate and ultimately doomed pursuit of ‘eternal economic growth’, with few accompanying measures to mitigate the most harmful environmental effects.

It’s becoming increasingly clear that we can’t go on like this. We need tangible, sustainable and realistic alternatives to the widespread grey infrastructure already in place. That’s where green infrastructure (GI) steps in – not as an infrastructural problem, but as a nature-based solution.

But what exactly is GI? The European Commission provides a formal umbrella definition:

“[Green infrastructure is] a strategically planned network of natural and semi-natural areas with other environmental features designed and managed to deliver a wide range of ecosystem services. It incorporates green spaces (or blue if aquatic ecosystems are concerned) and other physical features in terrestrial (including coastal) and marine areas. On land, GI is present in rural and urban settings.[2]

To put things more simply, GI comprises environmental features of different shapes and sizes to form part of an interconnected ecological network. It’s also multifunctional, meaning it can perform several functions within the same land area. Grey infrastructure, by contrast, is usually designed with just one objective or purpose in mind.

Not only is GI is highly sustainable, it enhances ecosystem goods and services – such as food, materials and clean air – and possesses built-in climate mitigation properties. The provision of a plethora of environmental benefits fosters in turn an improved quality of life for people and nature alike. In Europe, where space is highly limited, GI provides us with a model of land use in which available spaces are deployed in the most resource-efficient ways possible.

The most outstanding example of green infrastructure at work in Europe is Natura 2000, the world’s largest coordinated network of protected areas.[3] Stretching across all 27 EU Member States, Natura 2000 provides breeding and resting nature reserves for Europe’s endangered species. Instead of working against nature, Natura 2000 collaborates with and protects it. This is what GI does!

And there are plenty of other GI possibilities out there, and the benefits are countless. The diagrams below, from the European Commission’s Building a Green Infrastructure for Europe (2013) brochure, visually summarise it. 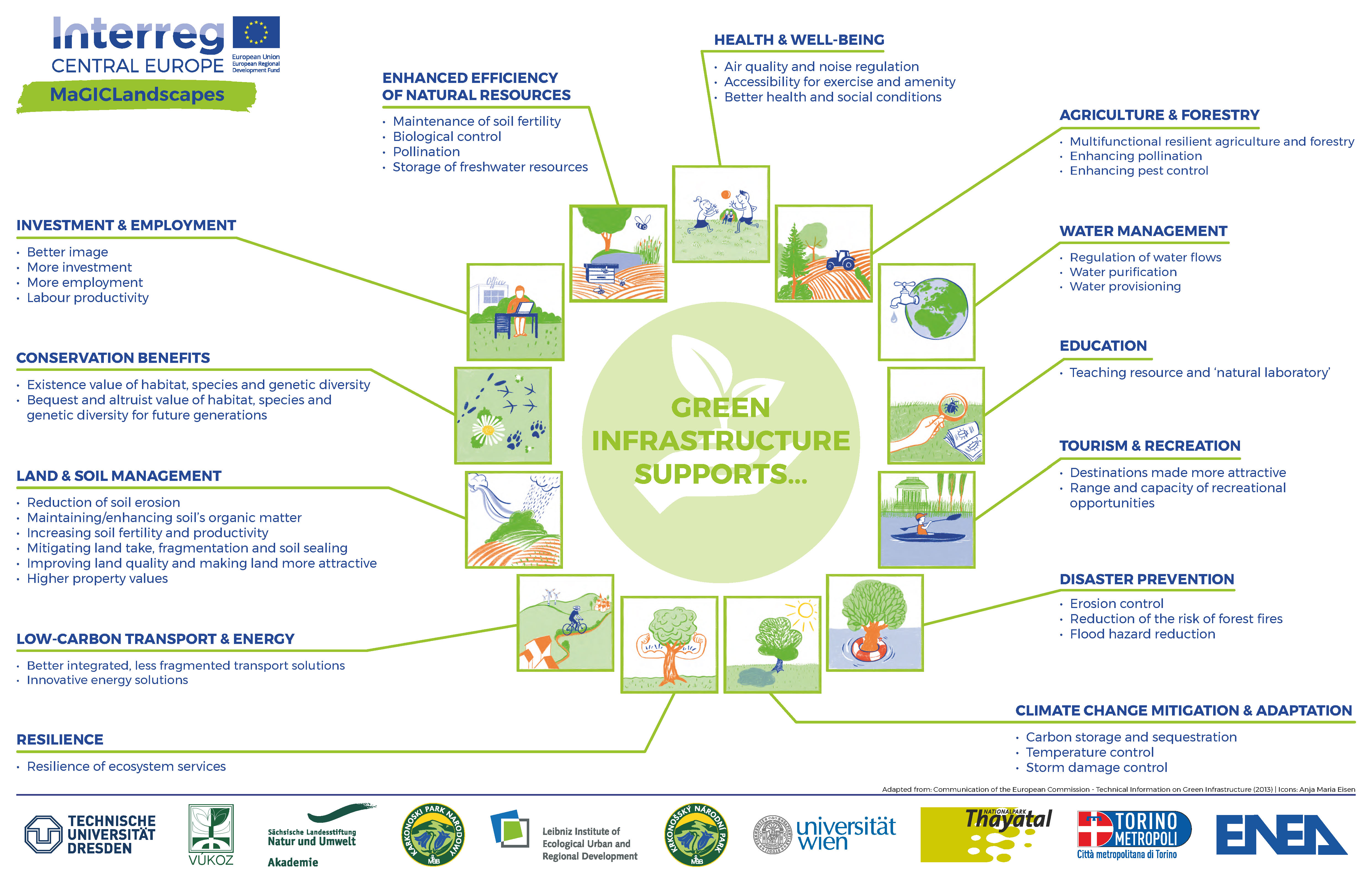 We must acknowledge that, in spite of all the benefits it brings, GI in Europe remains severely underdeveloped. Some GI-based mitigation measures, such as green bridges and other crossing structures, are designed to reduce wildlife mortality and boost connectivity between habitats via ecological corridors, but these are often inadequate or absent from road infrastructure areas due to poor landscape planning. Habitats within mainland Europe are already incredibly fragmented, and GI is currently too sparse to be able to address the issue effectively.

And that’s where SaveGREEN steps in.

In the next article, we’ll look at how GI is being incorporated into EU-level policy, followed by an interview with a GI field expert. We invite you to follow our social media channels on Facebook and Twitter to stay updated!

The article is republished from: SaveGREEN - The Power of Nature: An Introduction to Green Infrastructure